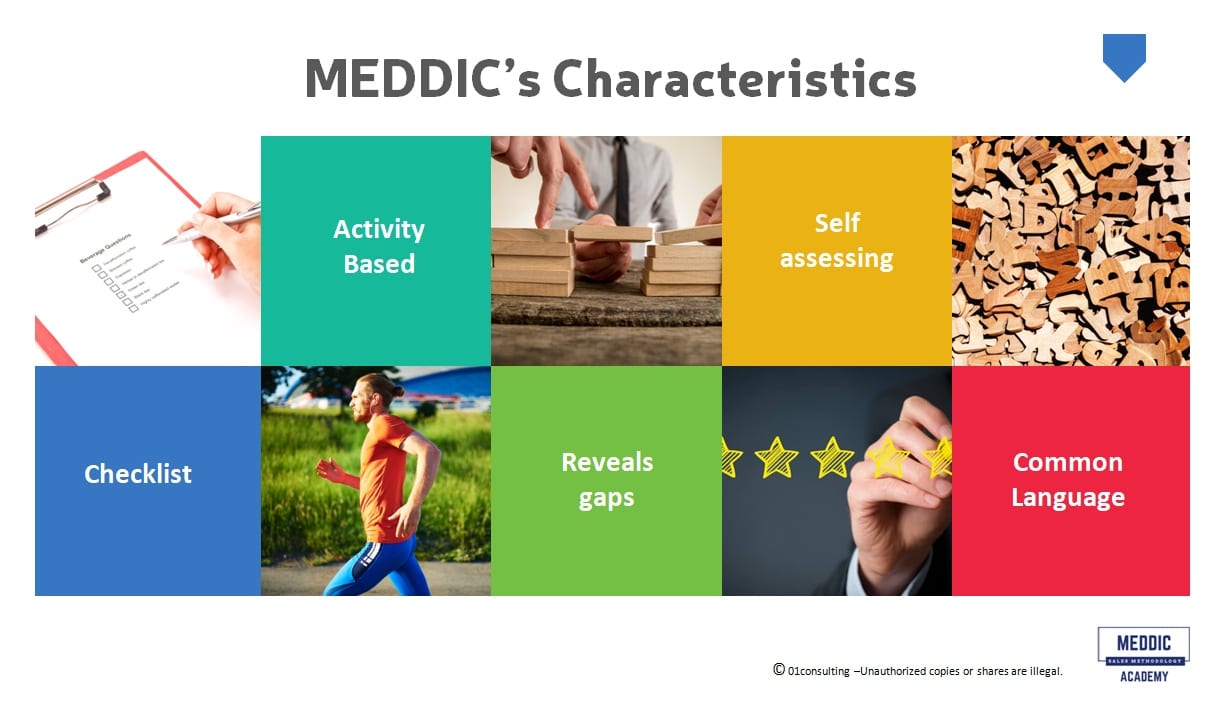 What are the benefits of MEDDIC sales methodology?

This is a question often asked by new MEDDIC Academy clients. It’s a great question. What are the benefits of MEDDIC? Why has MEDDIC become the most renowned sales methodology for Enterprise B-to-B sales?

In this article we are going to point out some of the key characteristics or features of MEDDIC. Then for each of these characteristics, we look at the benefits for the vendor.

MEDDIC is a Qualification-focused methodology.

By focusing on qualification, sales people let go deals which won’t close in the quarter (or any given time).Their attention and the company resources are being focused on winning deals, thus increasing the chance of closing while avoiding waste of time and resources on those which won’t close. It’s about simple maths. If a given sales person has time to handle, say 10 deals each quarter, increasing the percentage of closing of these 10 deals will directly increase that rep’s and the whole company’s revenue.

The forecast is always made by the deals which are getting our attention. By forecasting ONLY MEDDIC-checked deals sales teams naturally guarantee accurate forecasts.

Another benefit of MEDDIC, due to the focus on qualification, is an indirect impact on company profit. Without MEDDIC, it’s not just sales reps time which is wasted, but also pre-sales resources and even marketing resources in some cases. Less resources wasted leads to lower costs and higher profit at the company level.

MEDDIC is a checklist

The New York Times bestselling author, Atul Gawande, reveals the surprising power of checklists in his book “The Checklist Manifesto“. He writes: “Under conditions of complexity, not only are checklists a help, they are required for success.”

Checklists break complex systems into steps making it easier to avoid mistakes or to cut corners. Enterprise sales are complex. Breaking them into a checklist makes them much easier. That’s exactly the magic behind MEDDIC and MEDDIC Academy. It makes the sales methodology easier to learn and to execute. Also assessing a deal with MEDDIC is fast and almost immediate.

By highlighting the gaps in the sales campaign, MEDDIC directs reps to their next action. Closing the revealed gaps shortens the sales cycle and facilitates the sale.

Sellers don’t need their managers or a coach to tell them where they stand in their sales campaign. They can see it themselves by running the MEDDIC check-list. The same way a blood pressure monitor helps a patient self monitor, not needing to see a Doctor, MEDDIC helps sellers to self monitor their progress for a given opportunity. This also helps the sales management focusing on coaching and leading instead of micro managing.

One of the most immediate results of MEDDIC is to create a common language in the sales team. By providing sharp definitions such as for a Champion or an Economic Buyer, MEDDIC fluidifies the communications and allows everyone to focus on essentials. When your VP Sales asks you “Who’s your Champion?” you won’t point to any coach or fiend in the account, because you now know what exactly (s)he’s referring to. Similarly, no-one in your sales team is going to refer to the Head of Procurement as the Economic Buyer after the MEDDIC training.

These are the reasons why MEDDIC became such a renowned sales methodology before any academic or guru pushing it. It was originated by Executives from the field up to the academic trainers and not the other way around (unlike some other sales methodologies).