How Is Enterprise Software Sales Different? 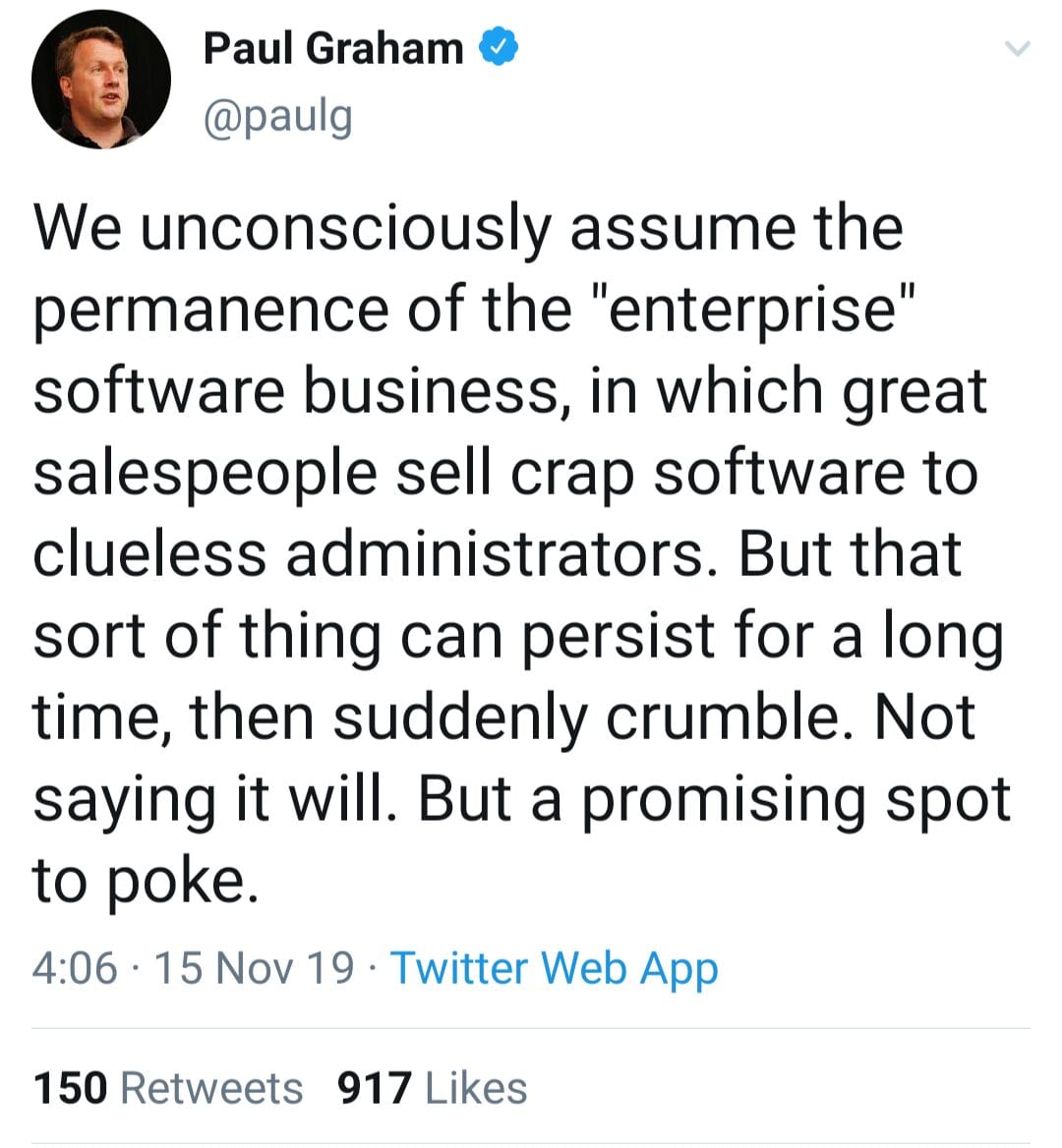 An edition of this article, titled “Paul Graham doesn’t understand enterprise software” was published earlier this week on Venture Beat.

As a philosophy lover, I follow Y Combinator founder Paul Graham on Twitter mostly because of his philosophical comments and quotes related to technology. Yesterday, I saw this on my Twitter feed:

I’ve worked in the enterprise software space for about 30 years, and it’s always been an island in the ocean of consumer software companies. In fact the only common point they have is software; their businesses are very different.

Now, only as a consequence of all the above, enterprise software companies need to attract the best sales people — highly educated, experienced, smart, hard workers who are great at execution. These salespeople need to have high IQs AND high EQs at the same time, which makes them rare. You have to pay 5 to 10 times more than what you’d pay consumer software salespeople to attract these talents. So it’s not that great salespeople built crap software (to use his word) because they were good sellers and became successful. It’s the complexity of the problems enterprise software solves that required top sellers in these companies.

Silicon Valley unicorns, those that Graham’s companies dream of becoming, have a hard time entering the much coveted enterprise space. Knowing that there are high margins in enterprise, they all try to get in. Uber is right now trying to build an enterprise business entity so that executives will use Uber through an enterprise account. They have huge challenges and will learn the hard way that the enterprise world is a different place. Facebook keeps experiencing huge challenges dealing with enterprise products (Workplace by Facebook). Even Google Cloud is nowhere close to the market share the company was hoping for.

Another observation proving the lack of understanding Silicon Valley veterans have of the enterprise software market is the fact there are simply not many of great enterprise companies from the area. You’ll find just as many that started in Europe or on the East Coast. And some enterprise segments are completely absent from Silicon Valley. One of them is the PLM market (Product Lifecycle Management), worth $50 billion worldwide, which is dominated by vendors headquartered in Boston, France, Germany, or Texas. (Dassault, PTC, Siemens PLM,..). The only large player in the PLM market from Silicon Valley is Autodesk, which has never made it into the enterprise.

I’ll still follow Graham — I learn interesting things from him every now and then. That’s why I am going to finish this article with one of his lovely quotes:

“At every period of history, people have believed things that were just ridiculous, and believed them so strongly that you risked ostracism or even violence by saying otherwise. If our own time were any different, that would be remarkable. As far as I can tell it isn’t.” ― Paul Graham