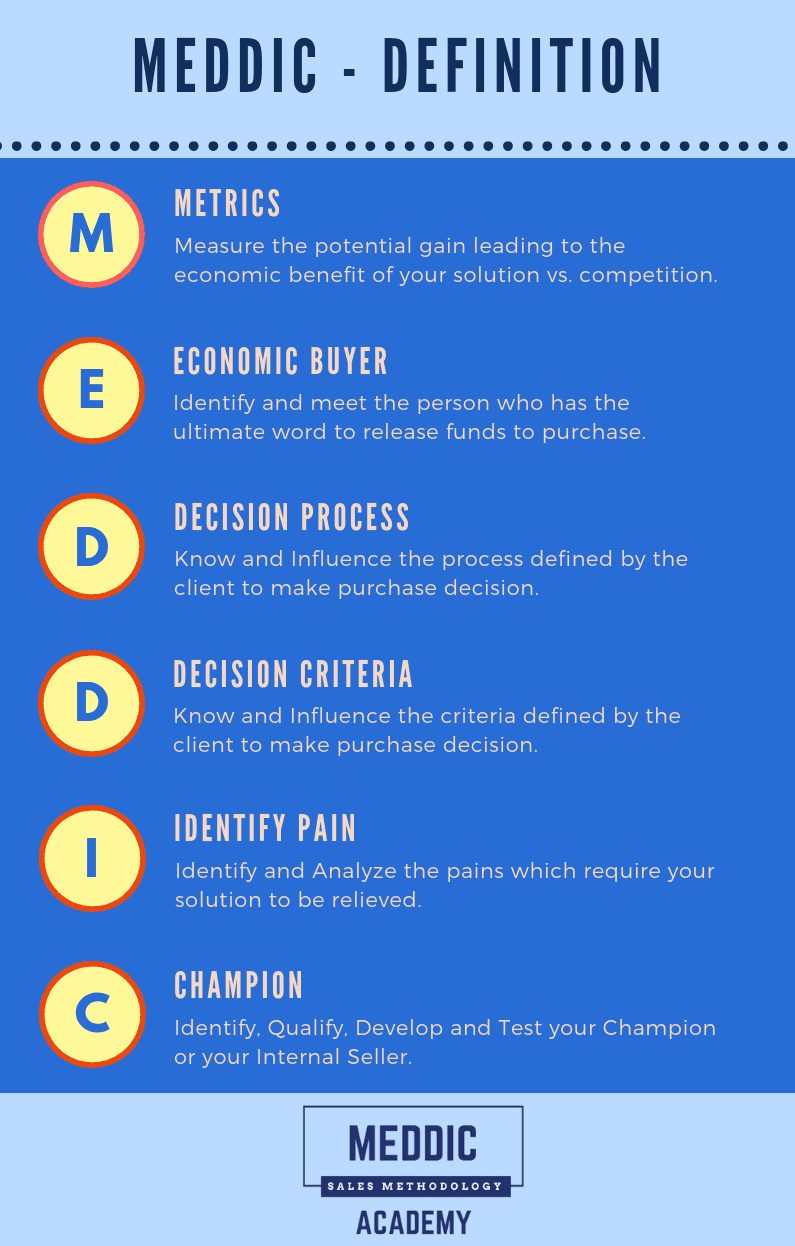 What does MEDDIC stand for?

MEDDIC is the most renowned Sales Qualification Methodology, applicable to any Enterprise Sales Process which is rather complex. The definition of MEDDIC is the acronym it represents, composed of six elements. They represent the MEDDIC checklist as described below:

In a nutshell, MEDDIC tells you that if you execute the above in any complex B-to-B sales campaign, you win the sale.

MEDDICC, with two Cs in the acronym, is meant to add the Competition. Obviously knowing your competition and strategizing your account plan based on who you are competing with is absolutely a must. But is MEDDIC without that second C incomplete? Or does it mean you are ignoring the Competition? Absolutely not! As a matter of fact “Competition” is inherently present in every action you engage in the account. In fact, some MEDDIC elements such as Metrics and Decision Criteria would not make sense if you don’t refer to competition. Adding “competition” to your checklist would be like adding the “Purchase Order” : hey don’t forget asking for the PO. (humor).

Where do we cover the Competition?

Metrics are, by definition, a comparative measure of benefits, obviously compared to the competition (which could be the incumbent system or the non-decision). Metrics forces the seller to consider competition.

Now if you think you may forget the competition, and feel better referring to MEDDIC as MEDDICC, with a second C, then you are very welcome to do so. It definitely does not hurt to emphasize that we need to know the competition, know what their weaknesses and strengths are, and most importantly who is their champion.

MEDDPICC® emphasizes the “Paper process” in addition to the “Competition”. Sellers need to understand the process through which a purchase request has to go inside that company for such a deal, and executing accordingly. Anyone with experience in complex enterprise sales knows that interactions with legal department or purchasing could be a nightmare if they are under-estimated. Especially since these interactions are at the end of the sales cycle and the deadline for the PO may be compromised whether it is the end of quarter for the vendor or the implementation expectations for the client. These issues take time to resolve, often leading to a delay in the purchase order. It is absolutely necessary for the Account Executive to understand the “paper process” and anticipate the issues. For instance you can avoid those issues by sharing your company’s standard contract or TOS earlier in the process.

Some would tell that the paper (purchasing and legal) process is part of the decision process, just like the technical approval process and business approval process. Well, the difference is that very often, the champion knows very well the technical and the business process all the way to the approval by the EB. But they don’t always know the paper process themselves. That’s why it does make sense to add it to the checklist to make sure we understand it, and that our champion understands it and we adopt a proactive approach with Legal & Purchasing departments to avoid any delay in the PO.

How did all this start?

MEDDIC & MEDDPICC® are the result of the Sales and Qualification techniques developed at PTC (aka Parametric Technology Corp.). PTC is a software company known for having built one of the strongest sales cultures in the context of Enterprise Software (now SaaS). The company had over 40 quarters of continuous growth during the 90s. The initial Global Sales Management team at PTC developed different elements of MEDDIC in the field. That initial team of sales managers in the early 90s, composed of a dozen of trailblazers are the true creators of MEDDIC. Later, PTC training managers at the headquarters in Boston were asked to put together the best practices in the field. They put them together in a formal practice course for new hires and gave it a name: MEDDIC.

How did MEDDIC Academy start?

MEDDIC Academy™’s founder, Darius Lahoutifard, was a member of that initial international sales leadership team at PTC who created MEDDIC. He took PTC Southern Europe from $4M to $27M in 3 years, beating the main competitor (which was and still is Dassault Systemes) in their own fiefdom (Dassault is a French company). As an anecdotal note, Darius’ team was able to beat Dassault in their own home market, France, while Dassault on the global level, is the only vendor that PTC never managed to beat, not even today (in terms of revenue, market share, head count, etc…).

Darius naturally contributed to the creation and articulation elaboration of MEDDIC and most importantly successfully executed on it, in the most competitive and challenging region. He later practiced it in his career including his sales leadership roles at THINK3 and Agile/Oracle among other companies. Darius made the first publications regarding MEDDIC and MEDDPICC® later in his career. In 2017 he founded MEDDIC Academy™, the first organization to offer online and blended learning programs on MEDDIC and MEDDPICC® for individuals, managers, trainers and Enterprise clients. In 2018 MEDDIC Academy™ became the first organization to deliver test-based certifications and make it possible to become MEDDIC Certified™.  In June 2020 he published the first book ever written on MEDDIC and MEDDPICC®, which ranked first in 2 categories on Amazon for weeks, thus obtaining the status of best seller. In January 2021 Gartner included MEDDIC Academy™ on its Sales Training Providers Magic Quadrant.  MEDDIC Academy offers on-demand online, instantly available courses, both virtual and in-person, for individual contributors, managers, trainers both as a public SaaS platform and an Enterprise private SaaS. The company also offers vILT programs (virtual Instructor-Led Training), live online workshops, as well as in-person trainings and workshops globally.